In Albarracín the weather started to get cold and climbing was getting too hardcore even for Mikael. Everything was grey and we were bit moody. Something had to be done or else I would have gone totally mad.

Me not being happy and able to climb.

In Albarracín Mikael had made one of his bouldering projects, Orejas de las regletas 8A, but there was still Pinturas sit start and Zatoichi to be done. Still we decided that it was time to leave Albarracín. Maybe a whole month in Albarracín is enough.

We had heard about this new bouldering area in Alcañiz, but there was no info about it on 27crags.com. The local climbers had made Bouldering Alcañiz -website with pdf-topos, but all the information was in Spanish. We had started to study Spanish with Duolingo so we could understand something, and the pictures were really promising.

All the info we got via the site and some videos hinted that the area was worth a visit. And the weather looked so much better there than in Albarracín, where they promised snow and way too cold the next days.

Alcañiz is only 2-3 hours drive from Albarracín towards Catalonia. It is a bigger town with all the facilities a van person might need. The city itself ain’t as cute and historical as Albarracín, but there is an old castle and some wall paintings.

The main square in Alcañiz. 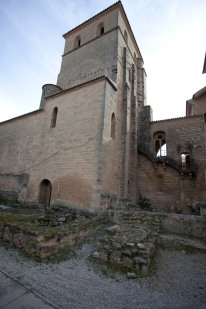 Also the nature is not like in Albarracin, it’s olive fields, a lot of muddy hills and all the plants seem to have spikes. So it might take some time to start liking this place. 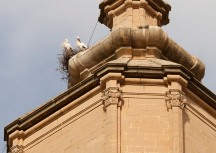 We had two days of quite okay weather and we climbed a little, but we didn’t really get so ”psyched”. The third day it was raining the whole day and we spent a tourist day in the town. After that we made one very bad decision, but I will tell that story later in the next post.

Everything changed on the fourth day in Alcañiz. Mikael walked around and checked an area called El Anfibio, meanwhile I contacted the local climbers through their Facebook page Montañeros del Bajo Aragón. There was an instant reply and only two hours later we met a couple, Olga and Miguel, who were local climbers. 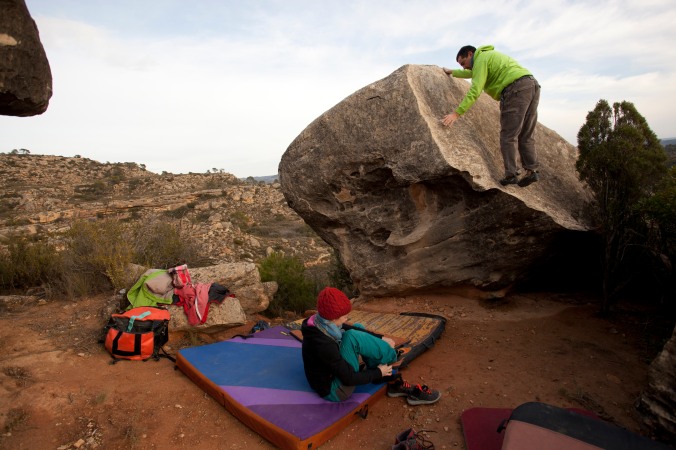 Miguel showing me, how to climb.

Miguel has been climbing in Alcañiz for over 10 years and is as fanatic about bouldering as Mikael. He has made also a lot of work with the topos and routes of the area. Olga and Miguel gave us tour around some areas close by, and the very next day we climbed together.

In the end it is Tarja an easy mantel. Yeah right :). 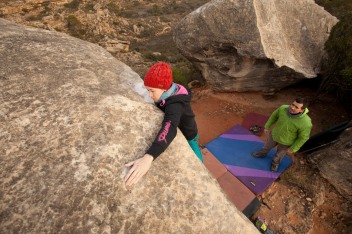 Another easy mantel by Miguel.

With a local guide, we got to see during the next days a lot of nice problems and areas. We also convinced Miguel about 27crags, so Mikael and Miguel started putting the existing problems into the system. Check it out from the 27crags the Alcañiz site. The area just seems so overwhelming in size and potential.

Climbing in Alcañiz is great, there is roof climbing, super hard mantels, small crimps, pretty much something of every style. The areas are usually small, with maybe 20-40 opened problems, but that is usually enough for one or several climbing days.

We only saw a glimpse of what Alcañiz is all about, but that might just be good, because now we definitely want back. There is officially opened about 700 lines, but there are a bunch of areas not opened officially. So the truth might be more like 1200 lines with problems in all grades.

During our stay we also bonded so well with Olga and Miguel, that they are reason enough to go back to Alcañiz. Also Astrid and René we met in Albarracín came to Alcañiz and we all had a great time climbing together and eating René’s amazing pizzas. We all together were a great team and had so much fun, that it was probably illegal.