Our journey continued straight from Stockholm to Helsingborg. The idea was first to stay the night in small place called Örkelljunga, but after some bad communication and even worse GPS-devicing we drove straight to Helsingborg.

There was a slight disagreement about what to do, mainly cause I got upset of the darkness. It’s too damn dark outside and sometimes it scares the hell out me, especially when I’m in a new place. Mikael of course was all relaxed and was listening my crazyness slightly amused.

We, but I mean mostly me, got over the whole incident quite fast when we found a great place to spend the night and I drank a little bit of Riesling. The place was next to the beach with a view to the sea and Denmark and Helsingör. There was even an indoor toilet on the beach we could use, which made me very happy. We had no chance to use electricity, since there hadn’t been enough sun for the solar panels. It didn’t really bother though.

We woke up in the morning and after the breakfast we took a hike to the close park up on a hill. Also we took some photos at the beach and stroll around there with a coffee mug. Mikael had been thinking that it would be difficult to find a good place for the van, cause the city was so big. In the end it was no problem and we found this place right away by looking the satellite picture in Google Maps. 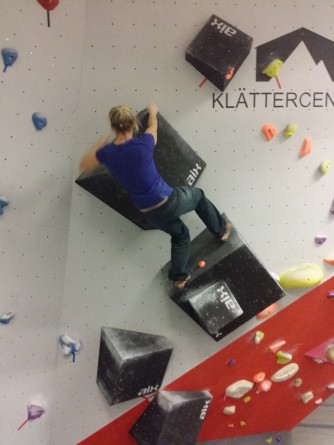 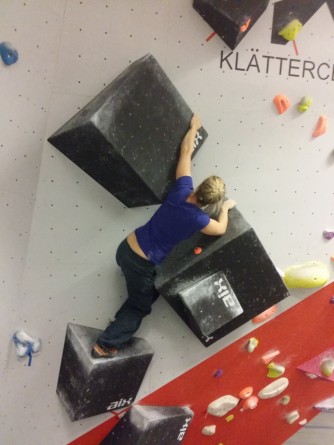 We, aka Mikael, drove from Helsingborg to Malmö and we went straight to Malmö Klättercentret. Mikael´s Swedish friend Jocke had recommended the place and it is supposed to be the biggest bouldering place in Sweden. The Climbing cave was all new and very nice. We found some nice routes, but I didn’t have the courage to fall from the top, cause the mattresses were a bit hard or cause I was a bit chicken. We were happy that there was also Sauna in the gym. Can highly recommend the place also cause of the friendly staff and climbers.

At the gym there was Wifi, so we checked the news and got bit upset about Trump being elected and also surprised that in the Finnish reality show Married at the first sight (Ensitreffit alttarilla) the two couples had stayed together out of three. To be honest Mikael wasn’t really upset about it.

We also bought the tickets for the ferry after comparing the prices when travelling with a 6,4 meters long and 3,2 meter high van. In the end we chose Finnlines and the route straight from Malmö to Travemünde (Lybeck). The cost of the ferry trip with two people, van and a dog was 113 euros.